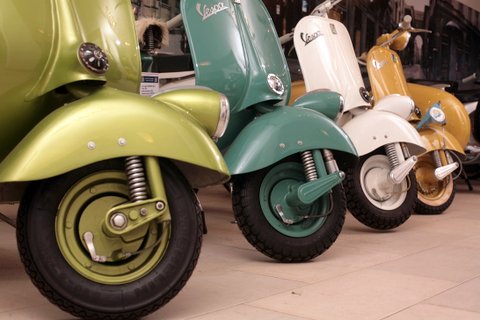 The unique Vespa Museum in Belgrade has been created from the idea of present visitors collating an unusual collection of Piaggio Vespa models in one place. This offers the opportunity to see a variety of different models, giving merit to both the admirers and users of the scooter. The Vespa, as an urban vehicle is present in everyday life as seen among many generations. The museum exhibition (an area of around 120 square meters) provides a chronological overview of the earliest models of the last century (predominantly the 1940’s) until the end of the last millennium, notably ending with the last model with manual transmission – the Vespa PX.

Easily recognizable all over the world, the Vespa is globally accepted as a popular urban vehicle, by far one of the most prolific means of transport.

With its characteristic appearance, sound and preservation of its basic form throughout the ages, the secrets behind the Vespa’s undeniable aesthetic appeal can now be recognized in one place, the Museum of the Vespa in Belgrade, Serbia.

Vespa Club Serbia has the largest and most valuable collection of Vespas in former Yugoslavia. The club intends to provide access to the audience to see the complete collections in a particularly designed space, and thereby presenting the myth that continues to this day in its modern form.

The idea of establishing a Vespa museum in our city began ten years ago, however it was not open until October, 2012. Located in the Progress Gallery in Belgrade, this exhibition personally gave me both the strength and will to orchestrate a more affordable viewing of the collection to a broader number of Vespa enthusiasts on the Internet and through the museum exhibition. Despite lacking in space (the museum is located in an underground private garage) it is our wish that the master’s hand, that of Zoran Luburića, shows through in what we and other members of the clubs in Belgrade and Valjevo have contributed for Vespa museum visitors.